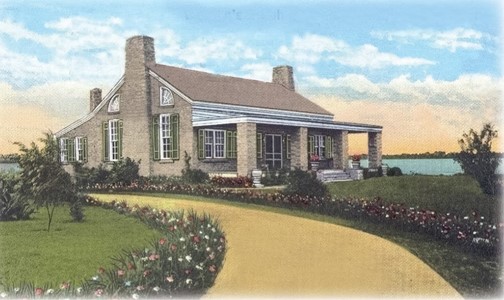 THE HOUSE THE DEPRESSION BUILT

This is the story of a park and a clubhouse which the depression built.  Incidentally, it proves what a group of women can achieve when roused to action.

When Mrs. Ben E. Moore was elected President of the Woman’s Club of New Bern, North Carolina, in the Fall of 1931, the prospects for her administration were poor.

In New Bern as throughout the country, membership was falling off.  Facing these resignations, Mrs. Moore decided that if she could hold the Club together with new and interesting programs until prosperity returned, she would be doing well.  Yet this outlook did not satisfy her.  If only she could devise some community projects which would stir the imagination of the Club members and check the flood of resignations.

At this critical moment, President Moore was holding the first meeting of her cabinet including some of her best workers.

Said Mrs. S.L. Dill satirically, “well, if you want to do something to mark your administration, why not clean up Union Point”?

Union Point had long been a festering sore on the face of New Bern.  Located at the exact junction of the two rivers on which New Bern lies, the spot had lost all beauty as it degenerated into the city dumping ground.  Instead of trees, shrubs, and beautiful waves, it displayed an expanse of automobile bodies, bed springs, boilers, street sweepings, gas stoves, every sort of animal refuse, vegetables and minerals.

To be sure, the redemption of Union Point had been a proposed project for various organized groups of many years, but the situation in 1931 was different.  New Bern has its full share of idle men applying for relief.  What was relief without work?  Only an empty gesture which would weaken the character of the men who received it.  Mrs. Moore’s imagination seized upon the idea.  The depression should build a park, transform a park and transform a dumping ground into a thing of beauty.

“That’s a nice suggestion, Mrs. Dill, she announced.  I appoint you spokeswoman of the New Bern Woman’s Club to wait on the Board of Aldermen at its next meeting”.  While waiting for the Aldermanic meeting, Mrs. Moore and Mrs. Dill gathered facts on which to build their case.  The argument which apparently won the day with the City fathers was this:  “having failed to commercialize the waterfront and to capitalize its material value, why not cash in on the natural setting.  Wouldn’t this bring new trade to New Bern”?  The Mayor and the Board of Aldermen authorized the Woman’s Club to clean up Union Point and to beautify it as a municipal park, provided this could be done without any cost to the city except wages of the regular street force when it could be spared.   Under the supervision of the street Superintendent and the direction of Mrs. Dill and her Club Committees, they began to clear away refuse, mow down the weeds, briers, thistles and thorns which obscured the view of the waterfront from the street; then to level off the ground which was like a gargantuan golf course,  all hideous chasms, hills, hummocks and bunkers.

As the psychological moment came, President Roosevelt announcement that municipalities could borrow P.W.A. funds by matching them with local appropriations.  Mayor Tolson, spurred by suggestions for the Woman’s Club Committee requested that some of the relief-employed labor be diverted toward the park project, and then things began to hum. A large force of laborers descended upon the former dumping ground with pickaxes, spades, shovels, hoes, rake, caterpillar trucks, steam rollers and every available tool for leveling off and grading the tract of land.

With all this came what was equally important to the understanding leadership of the Club women.  They realized the men now on the relief program had been on short rations for many months.  They opened a soup kitchen where they worked as cooks and servers. Other Club women collected donations, meat from butchers, vegetables left over at the end of the day, and unsold bread from the bakeshops. When the gifts disappeared, they raised cash by means known only to the Club women.  The main thing was the men were fed as they worked.  Next, one section of the soup kitchen became a distributing center for new and second-hand clothing which was contributed generously.  Clothed and fed, the men began to sing at their work.  When the men sang-you may know the success of any project is assured.  You must not think of this park building as a happy go lucky catch as catch can project.  No way! While some of the Club members made soup and distributed clothing, another committee secured the advice and cooperation of experts.  Local engineer and landscape gardeners gave freely of their knowledge.  From the near by city of Wilmington came the City Public Works Commissioner, Mr. Jimmie Wade, who developed the nationally famous Greenfield Park from an equally small and discouraging beginning.  The local plans were then submitted to the United States Park Planning Commission in Washington, D.C. which corrected defects and sent to New Bern a beautiful layout for a ten-year park plan. This was accepted by both the Woman’s Club Committee and the Board of Aldermen.  By this time Union Park was a clear and level tract and New Bern was thoroughly live to its opportunity.  Supported by a cooperating local press, the committees asked for donations of shrubs, flowers, etc. and the response was overwhelming.  Plants, vines and bulbs, even young trees were contributed and the right place in the plans was found for every gift.  When Spring swept over the park, thousands of jonquils burst into bloom and these were followed in quick succession by blooming Japanese quince, mock-orange roses, gladioluses and petunias.  Small native trees began to arrive in motor trucks and cars.  A large cedar was transplanted from the woods and dedicated to the Mayor and the Board of Aldermen. Under its branches each Christmas Eve the Woman’s Club directs the municipal singing of carols.

Union Park belongs to the people of New Bern.  Every organization in town and every public-spirited individual contributed to its beautification.  The Mayor’s gift was a lovely lily pond.  Todays the city goes to the park for its rest and recreation.  Cool breezes float in from the river front and the Boy Scouts who picked up brick bats and tin cans when the park was being cleared, now have their wiener roasts on the banks of the Neuse River and swim in its water. 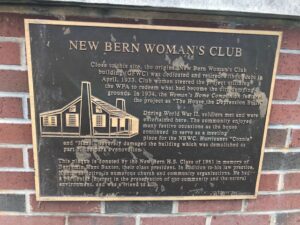 There it stands --- Union Point Park, a lovely monument to the Depression year of 1932.  But, were the members of the Woman’s Club satisfied?  Hardly!!! They wanted a home for their Club.  They conferred again with Mayor Tolson and the Board of Aldermen.  The Club was granted the privilege of building on the city park and was secured in its investment on an appraisal basis if the city should ever feel obliged to recall the site for other purposes.  The Club women still had a big card up their sleeves.  This was a building fund of nearly $4,000.00 invested in paid-in building and loan stock, earned through sales, dinners, dances, plays, bridge parties and great self-sacrifice.  The park proposition was ideal, particularly with the experience as park builders behind them.

A design was submitted for a clubhouse containing a large assembly room with a broad piazza at the front and a flagstone terrace.  At the rear of the assembly room there was a committee room, hall, kitchen, two dressing rooms, an open serving pantry and a powder room.  The Club determined to build the clubhouse without the aid of a contractor.  Committees hired and fired the necessary labor using the town’s best carpenter as foreman.  They bought all supplies on a competitive basis, with discounts for cash.  Some of the Club members were on the job almost constantly.  Its “master builder”, Mrs. Bradham started work at 7 o’clock every morning and all through the day and every day she was on the job.  The men, having been long idle, knew they were receiving current wages, plus.  The Boy Scouts collected clothing and distributed it to the colored laborers on Club recommendation slips.  Sometimes the clubwomen felt that miracles had been performed for them.  For example, just beyond the park had been piled a large quantity of pebbly concrete curbing taken from the shoulders of the county-owned highway when the road was taken over by the State and widened.  These blocks had been thrown on the dumping grounds as worthless.  The clubwomen asked the Mayor for them and they were used in the foundation of their building.

The building had to be erected on made ground and it would be necessary to drive piles for a firm foundation.  A “Club husband” undertook the supervision of excavating the pile driving and concrete work.  This saved several hundred dollars.  But the real miracle was the increase in membership.  It practically doubled while the two projects (park and clubhouse) were under way.  Women all over the city were eager to participate and in some cases men presented the names of their wives with a message like this: “here are my wife’s dues.  I’d like her to belong to your Club which is doing something worthwhile for New Bern”.

The clubhouse was completed and dedicated in April, 1933.  It was without a dollar of debt.  In fact, it still had $7.20 in the treasury and 1) one bond, bearing interest.  A happy group of women had achieved its great ambition---and perhaps the happiest of all was its Depression President, Mrs. Ben E. Moore.